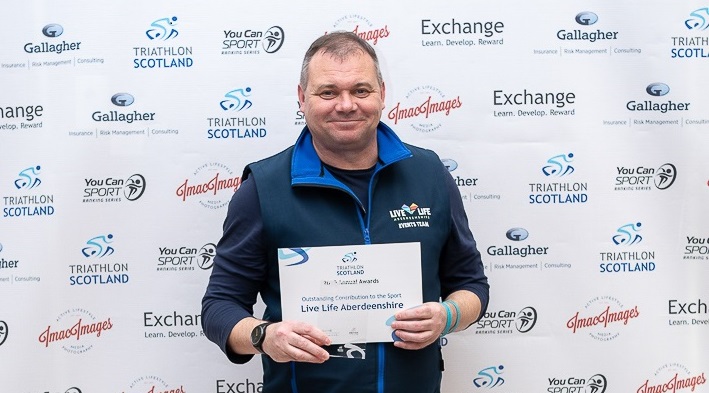 The national "Outstanding Contribution to the Sport" award from Scottish Triathlon is in recognition of the unique and long standing calendar of events that Aberdeenshire Council (Live Life Aberdeenshire) organises, including the triathlon, duathlon and aquathon series.

Members of the team picked up the award at a ceremony in Dunfermline at the weekend (Sunday, November 24).   Andrew Miller, Aberdeenshire Council, who has been involved in the events since their inception 31 years ago and Triathlon sponsor for the last 18 years, Bert McIntosh of McIntosh Plant Hire, collected the award along with current Events Coordinator and Race Director for Aberdeenshire Council Steven Barrett (pictured).

Feedback from participants is that they value the high quality of the events and that they are fun, friendly and relaxed. Participants report that they feel taking part has a positive effect on their mental and physical health.

The team's calendar of events is in its 31st year and the programme includes:

Those new to Triathlon are always welcome and advice is on hand for those who wish it.  There are high levels of new participants in some events, showing they are helping to bring more people into the sport.  Entries are being taken now, on the Live Life Aberdeenshire website,  for the 2020 Duathlon and Triathlon Series.

The Live Life Aberdeenshire Events team intends to further increase the quality and levels of participation of its events in future, using successes like this award to attract even more people to what Aberdeenshire has to offer.